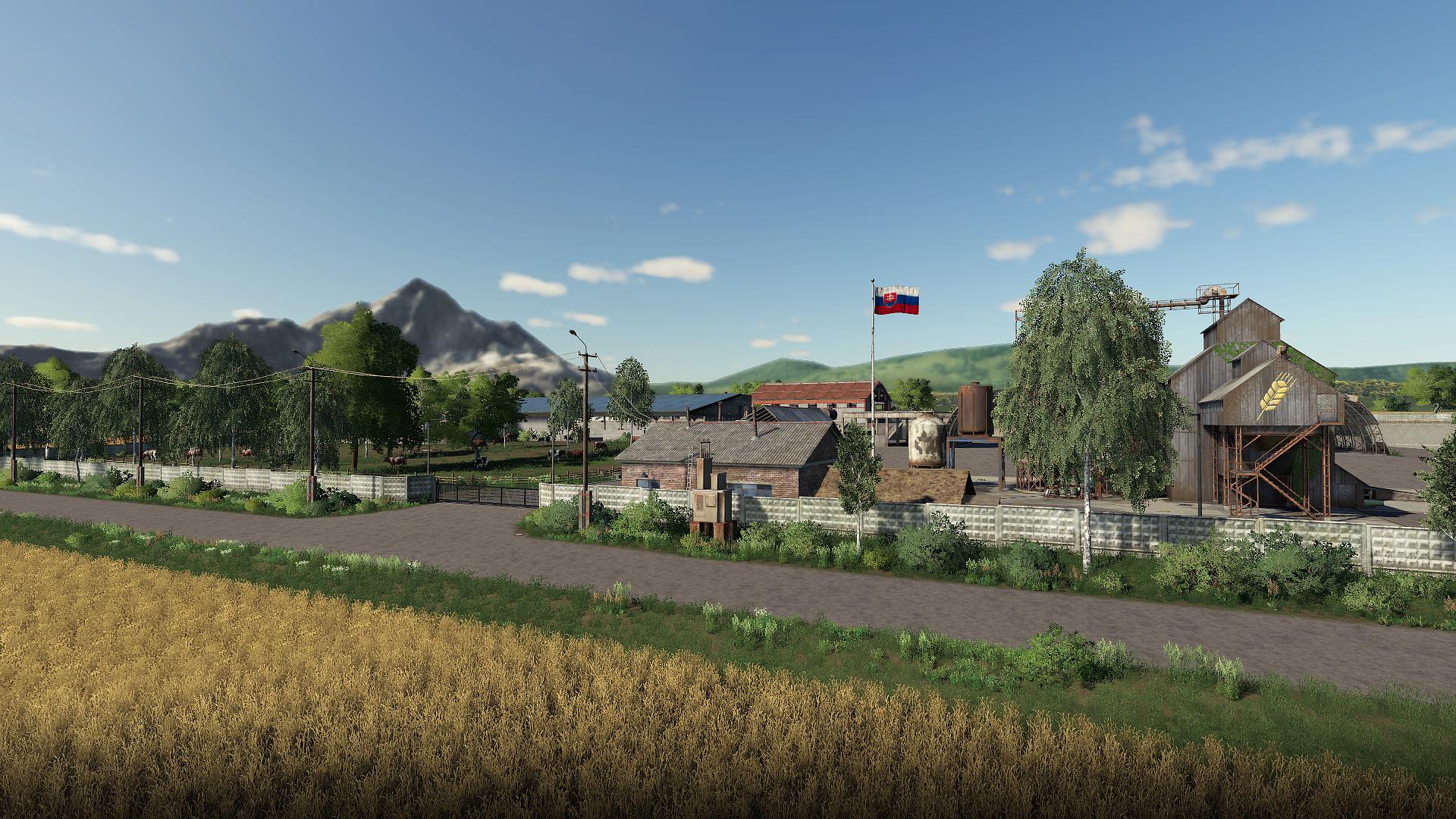 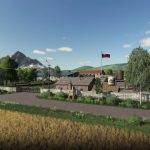 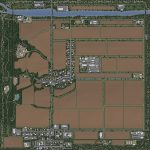 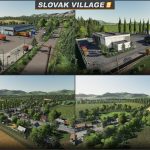 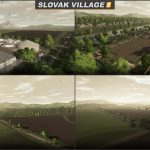 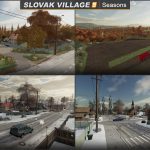 Welcome to the Slovak Village. This is a fictional map based on real life location in Slovak Republic.

Required Mods:
Global Company(by LS-Modcompany) – Must be enabled. USE CURRENT OFFICIAL VERSION ON MODHUB – 1.2.0.0, NOT THE DEVELOPMENT VERSIONS!

FS19 game updated to current patch is required of course.

– This map includes all Farming Simulator 2019 features.
– Animal pastures (cows, sheeps, pigs, chickens) built into the map for New Farmer game mode. Pastures can be sold aswell.
– Big detailed farm area for New Farmer game mode. In Farm Manager and Start from Scratch modes you can build everything as you wish.
– Preplaced detailed farm house in New Farmer game mode, located in village, connected with chicken pasture. So you can feel like a citizen.
– Train system included.
– 37 fields – small/medium/large – fields with its own specific shape and square fields.
– 14 sell points – including BGA, train.
– 4 railroad silos. In the city: Train loading yard – Grain, can load only grain. Train loading yard – Root Crops, can load only root crops + sugar cane. East of the map: Railroad silo east can load grain and root crops and sugarcane. In Forest area: Railroad silo – Wood chips, can load only wood chips.
– All sell points, railroad silos and shop have their own specific opening hours – you can not buy/sell stuff if they have closed. Note: On first load everything is closed, just wait 1 in-game hour and everything will be back in its standard opening hours cycle.
– Large forestry area
– Missions – field jobs and transport missions included.
– NPCs with Slovak names
– Custom transport mission pallets + reworked standard pallets.
– Large pallet of new placeable objects used in preplaced farm area in New Farmer game mode. So you can use them in other modes aswell. (small gas station, workshop, shelters, refilling stations…)
– Buying stations scattered around the map – you can buy seeds, fertiliezer, liquid fertiliezer, herbicide, lime… or even food for animals – oats, pig food. These are of course a little more expensive than the pallets from shop but more comfortable.
Manure and Liquid Manure traders included. You can both sell or buy from them. Manure can be loaded directly to trailer or if you wish you can use manipulator and load it manually.
– Small unique feature: In vehicle shop you can find Manitou forklift which is owned by nobody or the shop if you wish. This can be used to load your pallets you bought, do not need to bring your own manipulator. Especialy usefull for begining. It is there for everyone, do not steal it 🙂

– Expand your farming business to new areas. Various factories included in the map, from big buit-in factories to small placeable machines. (Quarry, Sawmill, Meat Factory, Dairy, Orchard…) To be able to produce in these factories you have to buy them first, by buying farmland they are built on. Smaller placeable machines can be placed where ever you want.

– Seasons Mod ready, with everything that the seasons mod offers. Texture changes – bushes change color depending on season, roads and similar objects changes texture during winter and so on. Custom weather, crop growth and environment data to fit the location of the map.
Cotton and Sugarcane are included, They will grow. These are not typical crops for the location of the map of course but if you strictly want to play realistically you can download seasons GEO mod from modHub by me – Seasons GEO: Slovakia, This is the same GEO used in the map, the only difference is that this is realistic (no cotton and sugarcane)
– Animal Pen Extension ready.

Changelog:
Changelog v 1.1
– Price balancing – Increased selling price for soy milk, meat products, bricks, stone, gravel and slightly for gold and dairy products. Increased buying price for empty pallets. Lowered selling price for apples, pears, plums, apricots, tomatoes, green peppers and lettuce.
– Pallet Fabrication: Redesigned functionality, empty pallets are now worth making as should have been and more boards produced from sawmill are to be sold, as ment.
– Sawmill: Adjusted ratios, how much boards and wood chips should be made out of same amount of wood / 1 log to 70% boards and 30% wood chips (was 58% boards and 42% wood chips) Decreased maximum capacity of wood to 1500000 l(was 2500000 l), previous max capacity was unnecessary way too high.
– Meat Facotry: Increased amount of meat you get from sheep to 700 l (was 400 l), to be profitable.
– Soy Milk Production: Decreased water consumption to 50% (was 70%) and max capacity to 150000 l (was 200000 l).
– Quarry: Added extra option / output type, how to take material out of heaps. For now at last – temporary solution, for those the direct loading with shovel does not work for some unknown reason.
– Quarry: Increased water capacity for Concrete Plant to 120000 l (was 80000 l) and for Gold Separator to 90000 l (was 60000 l)
– Orchard: Added extra option / output type for chaff heaps… .
– Orchard: Increased water tank capacity to 120000 l (was 80000 l) Now you can also buy water and manure in Global Company menu. Increased storage capacity for all orchard products to 120000 l (was 60000 l).
– Brick pallets, board pallets and empty pallets are now also spawned manually through GC menu, this works better and it is also better for performance. And with this change, storages have been added for theese products.
– Added modified version of original Thunder Creek FST990 fuel trailer with ability to unload into triggers, allowing you also to fill fuel in your factories. Marked with small white Slovak Village logo in the shop.
– Added placeable Carton Production, using wood chips and water you can make carton.
– Added placeable Sosnovka cow and chicken pastures and custom pig, sheep and horse pastures, built to Sosnovka style – using Sosnovka buildings.
– Added 2 placeable compositions of concrete fence wall of 28m and 44m length, for easier fence building. + placeable swing gate.
– Added small placeable universal silo, useful for animal food when placed near animal pastures and can be also used as storage for any grain types or even seeds and fertilizer.
– Added placeable Sosnovka bunker silo.
– Added Manure System mod support for pig and cow pastures.
– Added French language translation.
– Fixed distance terrain textures on fields. Some terrain types (e.g. after spreading liquid manure) did not had their distance texture.
– (SEASONS MOD) Redesigned seasons economy for most of the Slovak Village custom fill types.
– (SEASONS MOD) All Global Company factories are now properly configured for Global Company – Seasons support feature (Production speed is based on season length setting – you get same amount of product per year regardless of your season length). The normal values are now set to 3 days season length, previously without configuration it was on 6 day days season length by script automatically.
– (SEASONS MOD) Orchard will now stop produce fruits during the winter, greenhouses can now produce vegetables also during the winter. Tip blockers, which appeared previously during the winter, have been removed since they are no longer necessary.
– Many other small tweaks, fixes and changes that does not need to be noted.