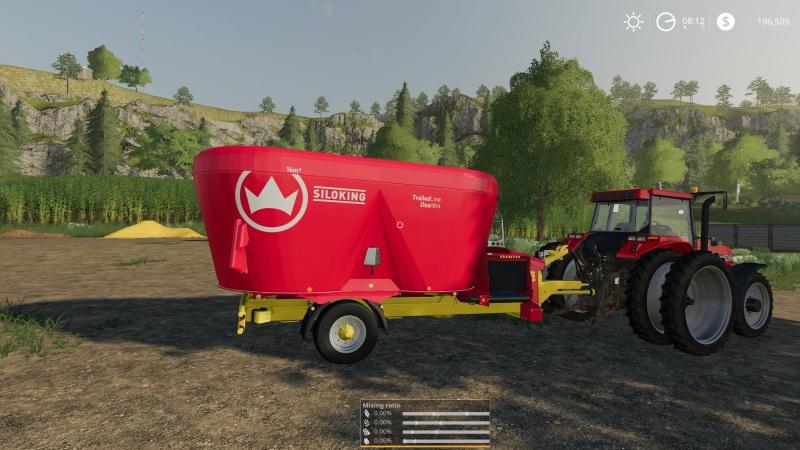 This mod does a few different things that change the default settings of the game, and as such it won’t be for everyone.
The mod makes changes to the mixerWagon specialization to allow a mixerwagon to create/mix more than just Total Mixed Ration (forage).
Included in the file is a SiloKing pig food mixer (found in Tools/Animals in the store).
The other changes it makes is to the animalHusbandry, specifically pigs.
It changes what the pigs eat and the way they eat (parallel to serial).
This means the pigs eat like the cows do. With cows, you mix TMR as their main food,
with pigs the main food is pigfood, which can be mixed in the SiloKing this mod provides.
You can also feed the pigs corn and root crops, which are worth 75% and 25% of dietary requirements respectively.
Like the cows, the pigs will take whatever food is rated highest out of whatever food is in the trough.
TMR is at 100% for cows and pigfood is now at 100% for pigs.
The pigs no longer take wheat/barley (grain) or soybean/sunflower/canola (protein), these are provided in the pigfood mix.
To attain a 100% production value for pigs, you will need to provide them with pigfood, either mixed with the mixer or purchased from the store.
The SiloKing mixer wagon provided by this mod will accept corn (base food), wheat/barley (grain), soybean/sunflower/canola (protein), and potato/sugarBeet (root crop).
For food types with multiple fillTypes listed, only the icon for name=”” (in the section of the vehicles xml file)
will display in either the Giant’s in-game mixer display hud or the mod mixerDisplay that I’ve uploaded.
This is to avoid having too many lines of display in the hud/mixerDisplay and is therefore expected behavior.
So if you load sugarBeets, and the icon display shows potato, it’s irrelevant, you are still loading a root crop into the mixer wagon and the
wagon will regard it as such regardless of the icon displayed.
The icon displayed is merely a placeholder for the foodGroup in question.
When using this mod with an existing savegame, and you have pigs already established, you will lose whatever amounts you have for wheat/barley (grain) and soybean/sunflower/canola (protein).
Corn (base food) and potato/sugarBeet (root crops) will remain unchanged.
And you will, of course, start with a zero amount for “pig food”, meaning you will need to either buy some or get a
pig food mixer and start mixing it so your production percentage can climb above 80%
The mod will create an xml file called “changedPigFeeding.xml” in your modSettings folder.
You can make small changes to this if required then and the mod will read them at load.
This mod should be compatible with mods like AnimalsManager (by HappyLooser) and dxm_FarmConfig (by DajoorXM).
It is, of course, compatible with the mixerDisplay mod I’ve uploaded.
***Keep in mind that this is a quick hack, always make a backup of your savegame prior to using a mod like this.