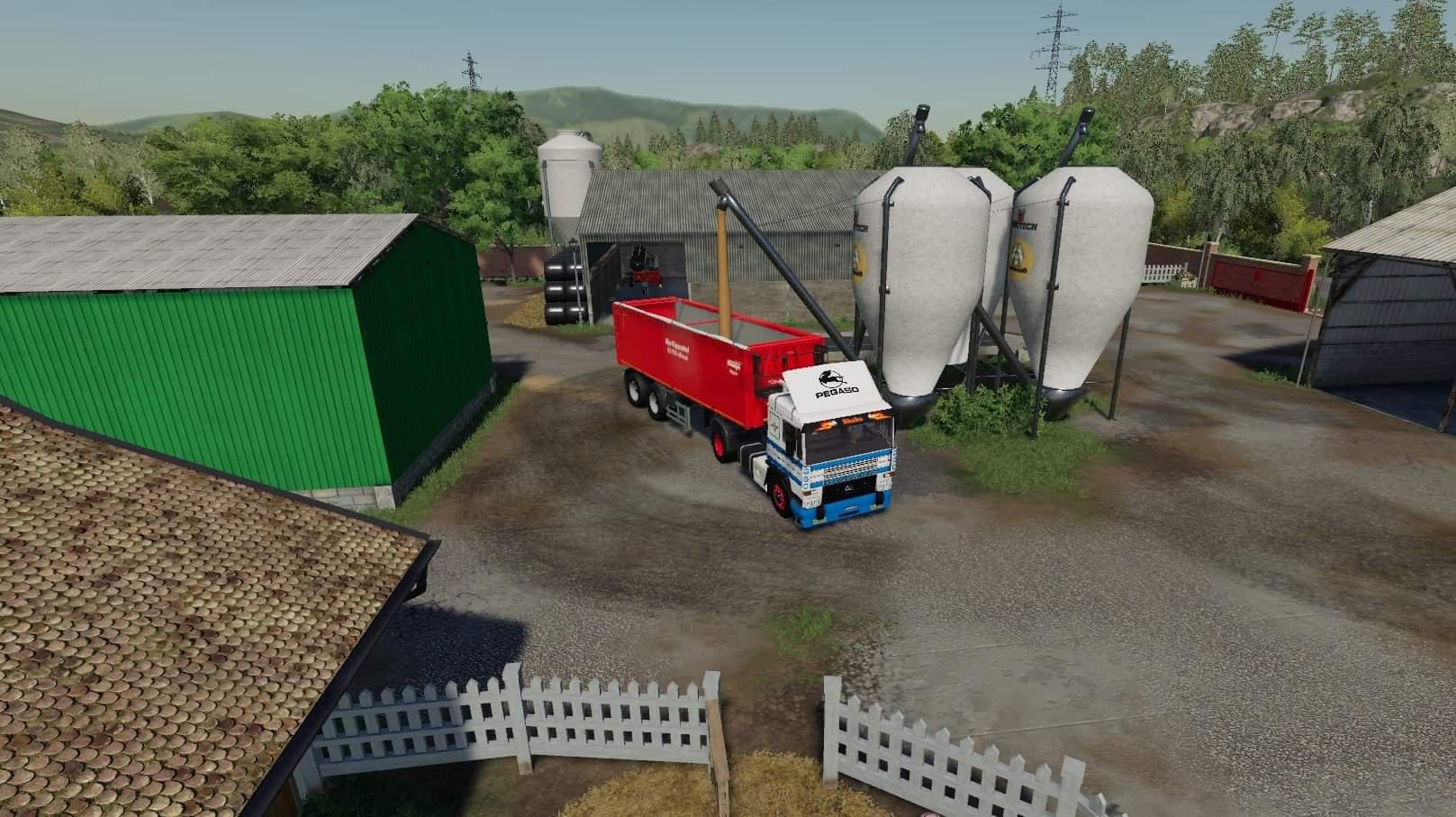 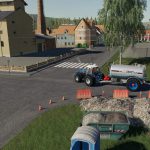 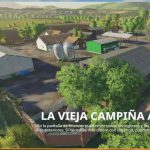 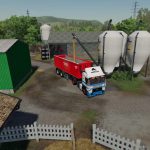 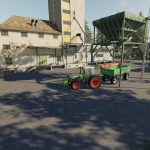 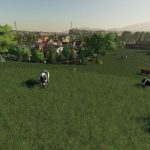 This map is the product of the imagination, it is not based in any specific place.

– The Old Farm Countryside includes all the features of Farming Simulator 19.
– 8 grain sales outlets, 2 sawmills, 2 BGAs and in addition, independent points of sale spread over the map, where we can sell all

the remaining products, sugar cane, beet, potatoes, milk, wool, cotton, eggs, wood logs, of course the animals and grass and straw.
– 3 large forest areas.
– 63 affordable land with a variety of sizes.
– Several free water collection points.
– Traffic included. (It will be increased in the final version)
– Multi terrain angle implemented.
– Custom lighting engine. (Subject to change)
– Customized transportation missions and field missions.
– Indicator posters.
– When using the tool to modify terrain and textures, add grass along with any of the 4 grass textures implemented on the map.

– All the animals are incorporated in the map, but you can add and place your own animal pastures anywhere else on the map if you wish.
– The main farm, along with the farm house can be sold so you can build yours instead.
– Animated doors that give access to the farm.
– Remember that both the farm, with all its accessories and animals, will only be available starting the game as New Farmer, the first of the three available options.
– This is version is beta, so the map is still subject to changes and modifications. Along with the possible errors that you can find.

– This map is a much improved and changed version of the same map version for Farming Simulator 17 and with many hours of work. I hope it is to your liking and enjoyment.

Changelog:
Changelog 4.0.0.0:
-The map has been adapted for the Precision Farming DLC, using its own terrain layer.
-The extra crops of the map, Millet, Sorghum, Rice and Rye become compatible with this DLC.
-The sale price of Cotton was increased.
-The map becomes compatible with the Seed Factory and the Hay Pellet Factories Pack.
-The products produced by the new compatible factories can be sold in various places on the map.
-Now you can supply your cows, sheep and horses with Hay Pellets as their main food.

Changelog 3.6.0.0:
-The prices of the products produced by the Factory Pack have been adjusted.
-Now you can sell Sunflower Oil, which due to a small error was not possible to sell.

Changelog 3.5.0.0:
-The map has been adapted to be used with the Placeable Factories Mod.

Changelog 3.2.0.0:
-Pedestrians have been added through the town.
-High traffic has been added to the north of the map.
-Building textures have been retouched looking for an improvement of slots in the consoles.
-Several useless files have been removed.

Changelog 3.1.0.0:
-Three crops have been eliminated due to incompatibility with Seasons Mod. We will only have Millet, Sorghum, Rice and Rye.

Changelog 3.0.0.0:
-Added 2 new crops. Spelled and Triticale.
-Several problems with the cultivation of Hops have been corrected.
-Fixed the error of the Eastern BGA, which did not allow you to compact the fine straw or sell silage.
-The opening and closing hours of the access door to the agricultural store have been changed.
-Now you can store all new crops in the farm silo.
-The height of the triggers for the sale of milk in West Harbor and dairy products has been adjusted.
-Added new translation: Polish (Thanks to RaV23 for the work done)
-All new crops have their name in English because they cause some kind of internal problem in the game.
-The collision that did not allow you to access the supermarket through the small entrance has been eliminated.
-The farmland near the area of the pigs has been modified, now the land occupied by the small lake enters the area of affordable land to be modified with the landscaping tool.
-Fixed the position in which the wool pallets left on the sheep farm, it will now be easier to pick them up.
-Adjust the height of various objects and stickers.
-Note: In order to collect the leftover food in the animal stables it is necessary to have the land on which they are located on property. As well as to download or collect material on the ground.
-Final version!!

Changelog 2.5.0.0:
-Two new crops were added: Rice and Hops.
-Modified the textures of the foliage and those of distance of the Rye.
-Very probably this is the final version.

Changelog 2.2.5.0:
-The Rye fill textures have been modified.
-Animation was added in the silo gate for seeds, ferlizer and lime.

Changelog 2.1.0.0:
– Ready for Seasons Mods.
– No snow inside the sheds and animal areas, among others …
– 3 new crops were added: Rye, Sorghum and Millet.
– Adjusted the milk triggers, which were a little high and the milk could not be sold.
– The collisions in the farm walls were adjusted so that products not accepted in the silos can be unloaded on the ground and do not pass through it.
– Fixed the collisions of the Bunker located within the area of ​​the cows.
– Some trees near one of the entrances to the farm were removed.
– I cannot guarantee that the mod of the seasons will work 100% correctly and without failures.
– Now you can enter the chicken coop with the lifting manitou (MC18) or similar to collecting the egg pallets.
– If you wish to remove the building from the main farm, I recommend using the Giants editor. I have not been able to put the option to disappear when selling the farm because that would involve many modifications.

Changelog 2.0.0.0:
– Ready for Seasons Mods
– Adjusted the milk triggers, which were a little high and the milk could not be sold.

Changelog 1.2.0.0:
– Now you can sell the animal stables in the New Farmer mode.
– Now you can sell silage in the haystack.
– Added Bunker for silage in the cowshed. (Need to start new game)
– Several buildings were removed.
– Several animated objects have been added as doors to access several points of sale, with opening and closing hours in some of them.
– Several map areas have been fenced.
– Corrected the error of the Great Demands.

The Old Farm Countryside – PC / Mac Version 1.1
FS19 The Old Farm Countryside
Changes and bug fixes for version 1.0
– Now you can store the food for pigs in the farm silo.
– Added 3 points of purchase of Cal in different points of sale.
– Fixed and adjusted the navigation mesh of the chickens. Before even if you did not see them, they fulfilled their function, although from the sky !!
– Adjusted the navigation mesh of the cows. Being located in irregular terrain there were places where cows floated in the air, now it seems that no. (Pending confirmation)
– Lamps and spotlights with automatic night lighting have been added to the different animal farms.
– Now the lamps and lights of the Main Farm are lit at night, before they were just decoration.
– Various decorative objects have been set in the ground.
– Added to the table of prices: Food for pigs, seeds, solid fertilizer and lime, we can see the amount we have stored, but can not be sold !!